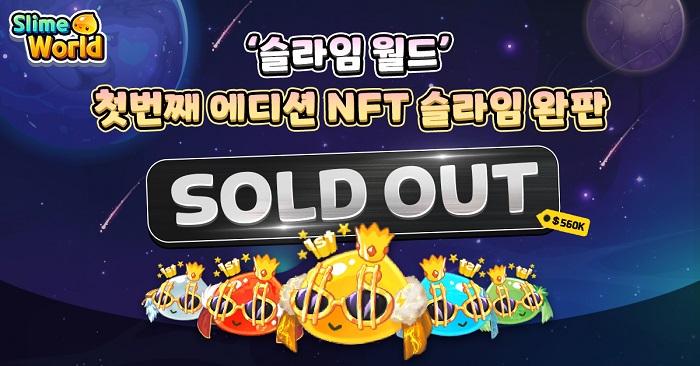 [Data provision = Hidden Monster] Nada Digital (CEO Lee Yun-Yeol) announced on the 19th (Tue) that it has sold out NFT (irreplaceable token) slime, the first edition of the blockchain-based P2E game "Slime World" using its own IP."Slime World" is a light and easy blockchain-based P2E game that anyone can enjoy using Nada Digital's own IP, and this first edition of NFT Slime is owned by users or traded through a bridging system to generate profits later and was sold in the in-game.The first edition of the NFT slime is divided into Normal, Rare, Unique, and Legendary, and a total of 706 were issued and sold for a total of 560,000 dollars in 54 days. In particular, six types of Legendary grade NFT slime were sold for about $50,000, accounting for a large portion of the total sales.In addition, based on cute slime images, each slime has a high scarcity by producing different attributes and appearance, and a certain number of capabilities are given to each grade when purchasing, so you can strengthen your capabilities through level-up. In particular, when owning NFT slime, more Nada tokens can be exchanged differentially for each grade."Thanks to the interest of many people, the first edition of NFT Slime was sold out in 54 days," a NadDigital official said. "We are preparing various benefits for those who purchased the first edition of NFT Slime, and incinerating 140,000 NFT Tokens, which is 1% of the total sales revenue of 14 million NFT Slimes."Meanwhile, Nada Digital signed a business agreement with Blade LABS DMCC (CEO Sami Mian), a blockchain wallet "BLADE," on the 11th of last month, and its cryptocurrency "Nada Token" was recently listed on the global virtual asset exchange "MEXC Global" and is focusing on expanding its NFT business."Slime World" can be downloaded through the Google Play Store and Apple App Store in the service country, and more information can be found on the "Slime World" branding page.